Our client MWEB, SA’s favourite Internet Service (ISP), set out to get a youthful, tech-savvy consumer audience talking about its WiFi offering. It did more than that. It got the world talking. 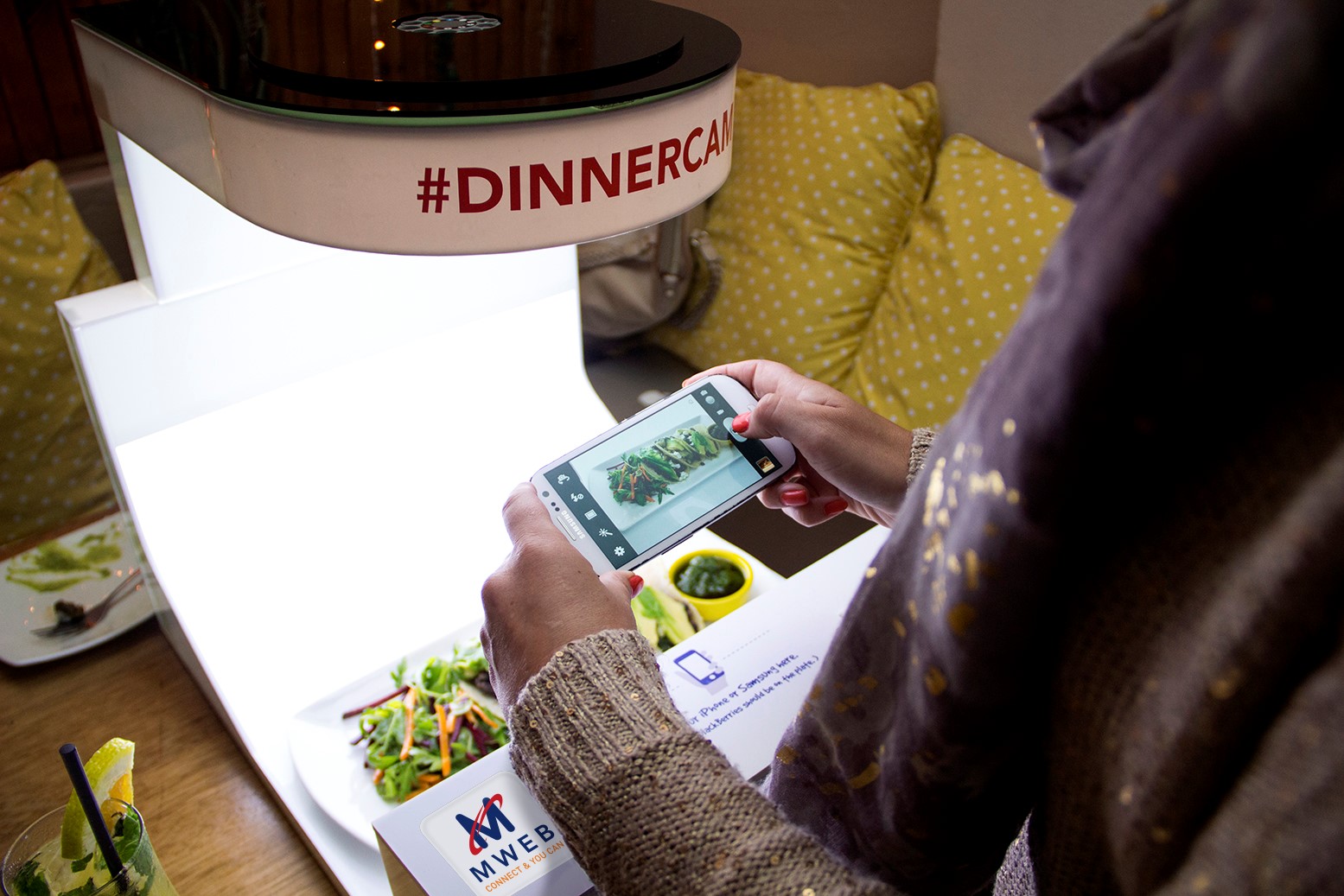 WINNER: The MWEB #Dinnercam campaign was a global sensation that won Atmosphere Communications a gold PRISM

MWEB was seen as just another utility provider and most earned coverage was limited to local tech and IT publications, which reported on service and pricing. MWEB’s products needed to appeal to younger, more tech-savvy consumers. It needed to show this audience that it was popular consumer tech trends and how people were really using the Internet in new and interesting ways. On top of this, MWEB had a number of dormant and disorganised social media accounts – frequented mostly by disgruntled customers - which needed a makeover to cut through the clutter in the already noisy and competitive social media space.

Atmosphere Communications, along with our social media partner agency Society, conceptualised a portable, quirky, world-first “foodography” studio for those foodie social media loyalists obsessed with sharing their favourite restaurant meals. Enter the MWEB #Dinnercam. By tapping in perfectly to the prevailing internet behaviour trend of the time, the campaign managed to spark conversation about WiFi in modern public life, not only in social media through its popular hashtag #Dinnercam and campaign video on YouTube, but also across a mass of top global media. Soon, in South Africa and globally, a lively online debate ignited about the merits of “food porn” and its new poster child, the #Dinnercam.

Tactic 1 MWEB partnered with one of Cape Town’s trendiest Mexican restaurants, El Burro to introduce the public to #Dinnercam. Local media, foodie influencers and lifestyle bloggers, well-known Instagrammers and other social influencers with large online followings, were invited to join us for a meal to try the #Dinnercam. Free MWEB WiFi was set up at the venue allowing all #Dinnercam users to immediately start sharing it online. We also connected used the hashtag extensively and printed out Polaroid-style photos of their #Dinnercam shots at the events. During the launch period (April and May 2014), we made the device available to all diners, and eNCA, eTV’s 24-hour news channel, came to trial it for their prime-time news segment. Tactic 2 We produced a high quality YouTube video and stills of the #Dinnercam in action. Tactic 3 Visuals were shared with local and international bloggers and social media noisemakers on Twitter, Facebook, YouTube and Instagram and across MWEB’s refreshed social media channels, along with a short and sweet social-media friendly snippet explaining the concept. Tactic 4 Good old fashioned pitching of the highly sharable story across SA and international media saw #Dinnercam gaining fame/notoriety across the globe. This, added to the already potent social media mix, saw the campaign explode in terms of international reach. Tactic 5 After successfully going global, we secured coverage of a campaign results case study media release in local and international marketing and brand media.

Delivered: return x11 on the campaign investment with coverage totalling an AVE value of R3,9million with a total estimated global reach of 73 million potential readers around the world. Coverage appeared in mainly news, lifestyle and foodie media and blogs, where MWEB wanted to play. Notable coverage include eTV and ENCA primetime news (5 million viewers), top local blogs and online news platforms such as Memeburn, Dailyfix and 10and5.co.za and stand-out international coverage on Yahoo.com (1.9 billion visitors p/m), time.com (42 million visitors p/m), Foodnet (10 million viewers p/m), Foxnews.com (67 million p/m), LA Times (over a million readers p/m), and NY Daily News (781,553 unique visitors per day). Some of the top international trend and PR blogs such as PRExamples, TrendHunter, PSFK, Springwise, The Daily Dot, Design Taxi, Ads of the World and Bored Panda also covered the campaign and top global food media and blogs such as Epicurious, CelebrityChef.com, Foodrepublic.com, Finedininglovers.com, Firstwefeast.com, All About Food Magazine and Flavorfulworld.com covered the story and posted the video. On the social side, the #Dinnercam YouTube video and hashtag was used in 45 prominent international websites in the month of its launch. We also achieved 100% penetration of the brand word “MWEB” and 44% of “WiFi”, and positive media sentiment about MWEB increased by 150% compared to the previous month.