Thousands of fans say “Cheers!” to 20 years of OppiKoppi 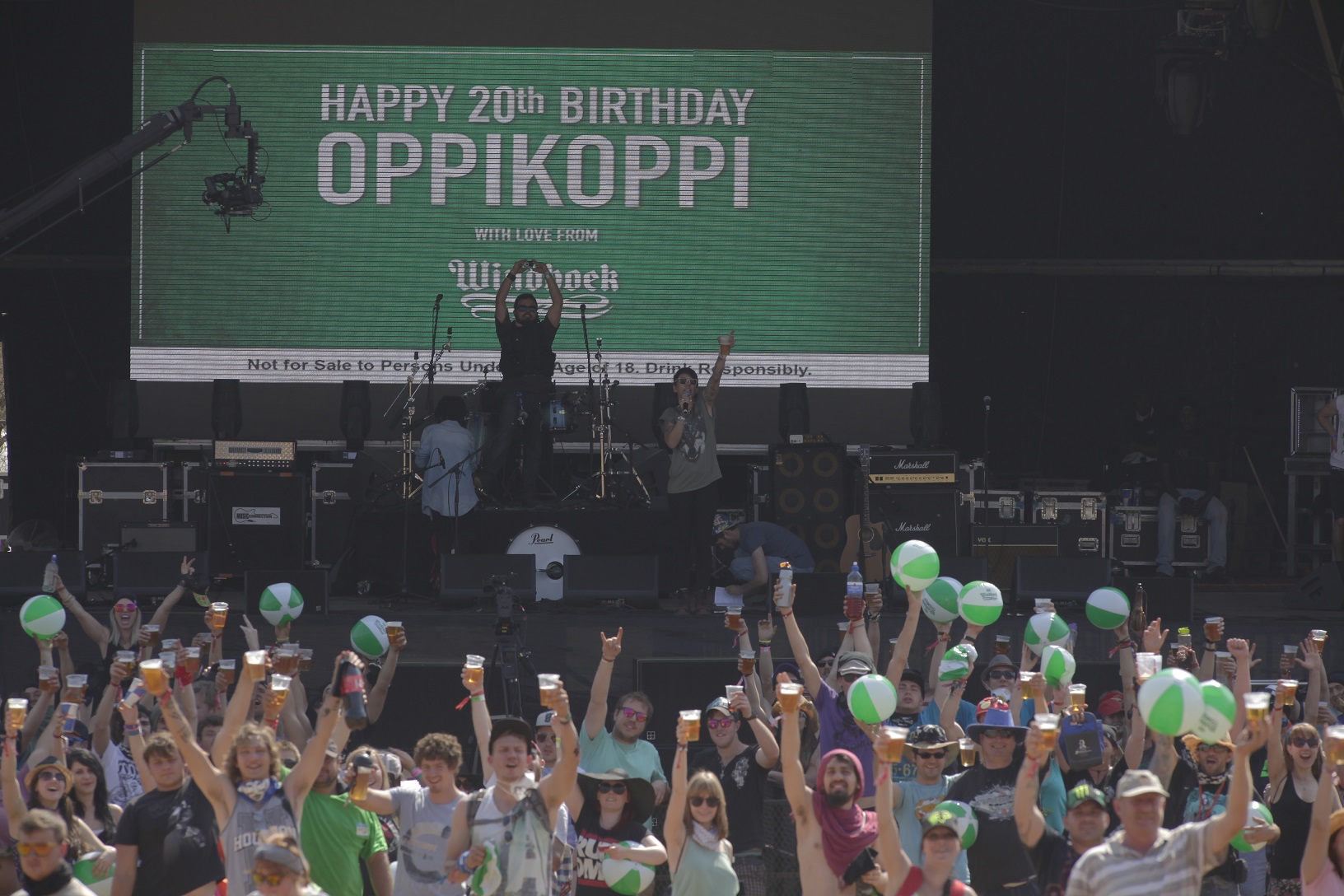 21 August 2014: Hundreds of music fans and their favourite artists gathered in the bushveld this month for united toast to celebrate the 20th birthday of OppiKoppi, South Africa’s top annual alternative music festival.

Hosted at the central Wesley Dome on the festival grounds by the official beer sponsor of music festival, Windhoek Beer, each reveller had a beer in hand and raised a birthday toast to Oppikoppi amidst a sea of green beach balls, spurred on by the loud and proud MC, Catherine Grenfell.

“It was an amazing moment. We looked down at the crowd and everyone raised their glasses to 20 years of Oppikoppi, a festival that has really made an indelible impact on the SA music scene. It’s a wonderful festival and we’re proud to support it,” said Alan Roberts, Windhoek Marketing Manager at brandhouse.

The OppiKoppi festival – this year themed Odyssey based on Greek legend – was an epic birthday celebration and boasted a line-up of rock royalty both from SA and abroad.

MTV interviewed several artists on the Windhoek deck, with a majestic view over the festival grounds and rolling bushveld landscape. At the same deck Windhoek displayed the rare Fender Blacktop Stratocaster, signed by the top artists at OppiKoppi. Festivalgoer Toby Shmahnwas the lucky winner of this rare guitar and received it on stage on Saturday night.

The festival was of grand proportions on various levels. A befitting 20 000 people attended the 20 year celebration, which is about 20 times the population of Northam, the Limpopo town that hosts Oppikoppi every year. It ultimately being about the music, the festival attracted 138 South African and 14 international bands who collectively performed a total of 152 hours of music at the festival. Over the three days of the festival, an estimated 73 000 units of beer were enjoyed at the festival. On a social media front, the festival generated 3200 tweets (and counting), about 240 Facebook posts (and counting) and 400 local and international media covered the event.

Windhoek rewarded fans with 5000 free limited edition hoodies, 2 000 beanies and filled hungry bellies with 1400 burgers on the Windhoek deck where fans could spend time enjoying the spectacular views over the surrounding landscape.

Windhoek Beer has been on a journey of no compromise for a century, allowing pure beer lovers to say yes to the Right Stuff: three pure ingredients and nothing else, and its quest to provide only 100% pure beer was no different at OppiKoppi Odyssey. Windhoek Beer wishes OppiKoppi a happy 20th birthday and many more years of success.

NOT FOR SALE TO PERSONS UNDER THE AGE OF 18. DRINK RESPONSIBLY.

**Windhoek Beer is made according to the strict German beer purity law, the Reinheitsgebot, first decreed by Duke Wilhelm II in 1516. It stated that a beer may only contain malted barley, hops and water. This is what makes Windhoek 100% Pure – and it is a brewing ethos that Windhoek brew masters stick to, without compromise. It’s an ethos that stands for an unwavering commitment to quality in Windhoek Draught, Windhoek Lager and Windhoek Light. Even though there are cheaper, faster ways to brew beer, Windhoek follows the way of the Reinheitsgenbot no matter what.

brandhouse is South Africa’s leading total beverage alcohol company with an unrivalled portfolio of premium brands across the spirit, beer and RTD categories. The portfolio of brands includes Johnnie Walker, Smirnoff, J&B, Bell’s, Bushmills, Tanqueray, Ciroc, Captain Morgan, Amstel, Heineken, Windhoek, Guinness and Strongbow, amongst others. brandhouse is a passionate campaigner for responsible drinking and an active, responsible corporate citizen that cares about the communities and the environment in which it trades. We therefore encourage Oppikoppi festival-goers to drink responsibly.

For more information about brandhouse, its people, and brands visit us at www.brandhouse.co.za.