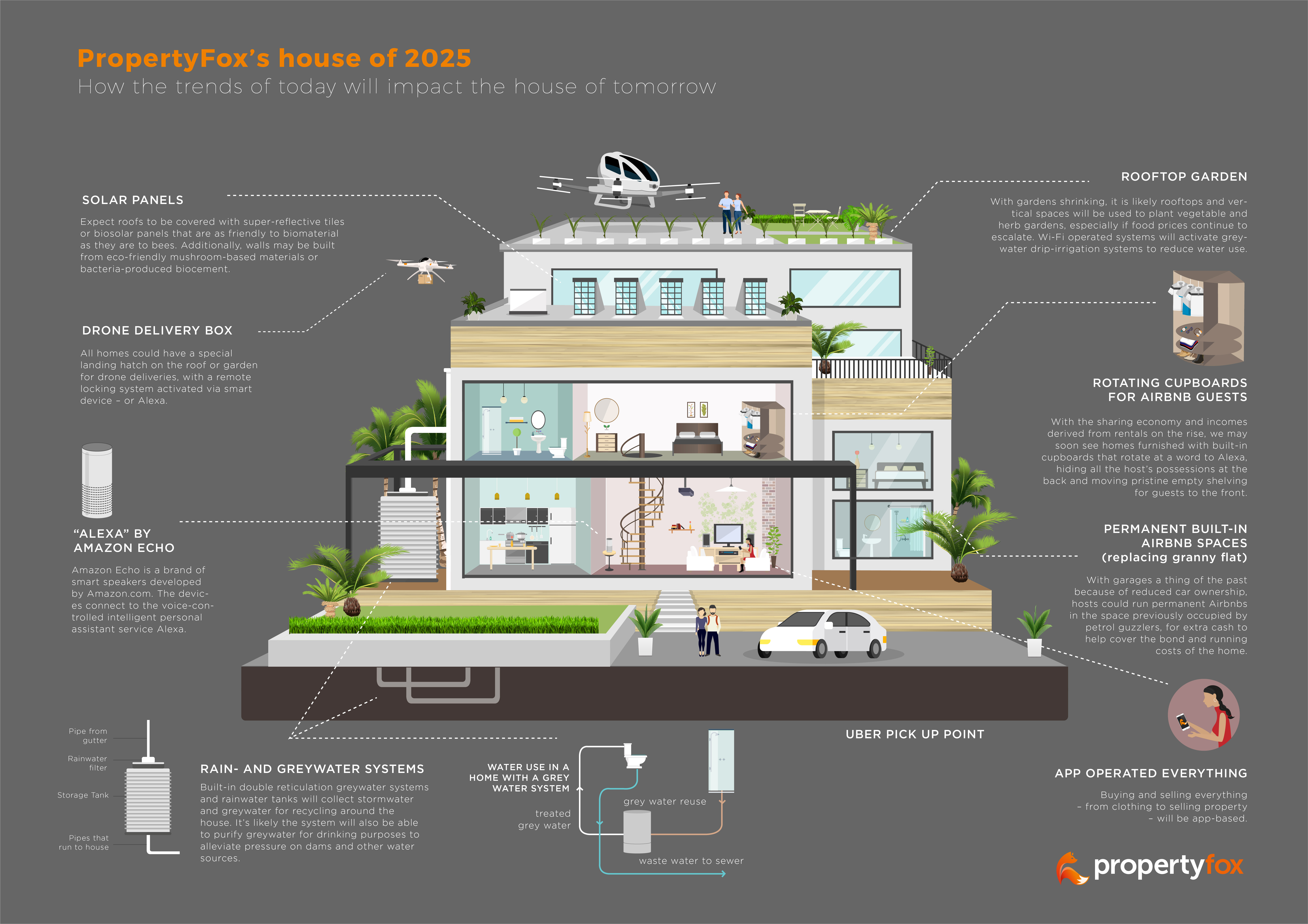 By 2020, UberAir plans to run air taxis in at least three big cities – Dallas, LA and Dubai. If these get off the ground a transportation revolution could be sparked that could lead to the rise of airborne cities (think Fifth Element or Blade Runner). Add to this artificial intelligence, environmental issues and the sharing economy and it seems fairly certain that the way we live, where we live and how we build our homes is heading for a dramatic evolution.

Crispin Inglis, CEO of smart online real estate agency PropertyFox, believes that as early as 2025 homes could look vastly different. “The speed of technological development is just too rapid to ignore and because of the long-term nature of property investments, planning now for the future is critical.

“So if you are renovating, buying or building a home – or if you are a property developer – designing for the future, rather than the now, is the smart thing to do.” PropertyFox has analysed some of the biggest trends, issues and tech currently impacting us and believes by 2025 our homes could have evolved in some of the following ways.

Even after Cape Town emerges from the current crippling drought, our water woes will not be over. South Africa is one of the top 30 water scarce countries in the world. Relying solely on our municipality for water supply won’t be sustainable into the future, so houses will need to have in-built rainwater tanks and double reticulation greywater systems. The popularity of large gardens and pools will diminish and we may even see the disappearance of the water-guzzling bathtub in favour of showers that automatically turn off after two or three minutes.

Alexa – Amazon Echo’s SmartHome assistant – will become your best room-mate ever. She won’t finish the milk, hog the bathroom or bring home her smelly boyfriend. Instead, Alexa will read you the news, answer even the trickiest questions, take phone calls, control lights, open curtains and update shopping lists. Alexa the bot will become a valuable part of the family so you’ll want to rig your house up to be smart enough to allow her to reach her full potential.

Eventually, it is possible that there will be ‘helipads’ purpose built on rooftops. But even if air transport doesn’t ‘take off’, Uber, Taxify and lift sharing apps will almost certainly catalyse a big decline in car ownership. As a result, the space previously used for the garage won’t be needed so we’ll either see smaller plots or the garage area being diverted for other uses.

Perhaps the portion of the property previously used to house cars will now be a separate entrance to welcome Airbnb guests who help cover the bond and running costs of the home.

Another possible modification could be that some aspects of a home, like storage, become purpose built for sharing. Currently a lot of people rent out their homes for short periods over December and January and they have to laboriously pack up all their personal possessions so that the house feels like a holiday home to guests. A neat solution is to install rotating cupboards that can move the host’s private possessions to the back at the click of a button, with pristine empty shelving, guest towels and linens moving to the front for guests.

The combination of air taxis, self-drive cars, car sharing apps and Uber, means there’ll be fewer cars on the road by 2020 which will likely mean fewer traffic jams. This may mean that a city’s trendy crowd will be comfortable living further out of town and new areas will spring up full of good restaurants and bars.

If food prices continue to balloon, more and more people will start growing their own produce. With gardens shrinking, it is likely rooftops and vertical spaces will be used to plant vegetable and herb gardens.

To keep ecommerce purchases delivered by drone safe, there may be special landing hatches on the roof, possibly even refrigerated ones for food deliveries. As the drone pulls in, you can open the hatch remotely via your smart device – or Alexa can do it while she waits for you.

Trend forecaster Dave Nemeth says that a cool future feature is ‘on command interior design’. Through LED and projection technology you will be able to change the look of your house on a daily basis. One day you can project rose gold wallpaper onto your lounge feature wall, and when that trend moves on you can go ahead and switch to a smoky blue paint effect. Where you place your TV will also be less of a big decision as mobile projectors will allow you to stream Netflix on any wall or surface around the house.

Buying and selling everything – from clothing to property – is likely to be app-based. PropertyFox, for instance, is already launching a user-friendly dashboard allowing sellers to pick from a selection of services like home staging, home cleaning or bond applications. It also lets sellers keep up to date on viewing and responses and allows them to easily compare their home’s evaluation to other properties of similar size and value on the system.

Using PropertyFox’s smart evaluation tool – which crunches property data from each area to calculate the best possible price point for a home – and applying an escalation rate based on the pattern over the past eight years, the average price of a house similar to the one described would escalate as follows: