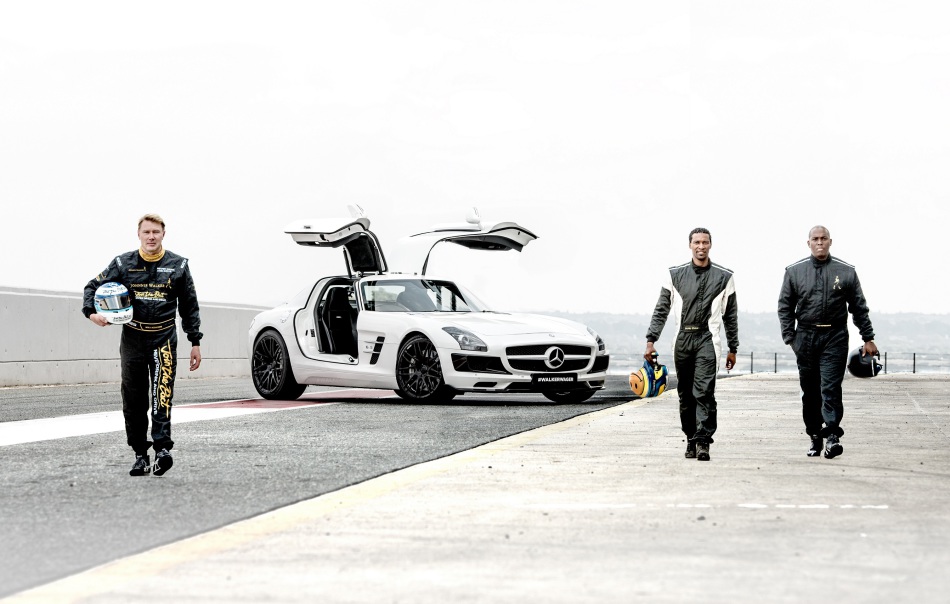 In association with superior luxury whisky brand Johnnie Walker Blue Label, Zulu wagered Häkkinen that if he could accomplish a near impossible feat, Häkkinen would need to hand him the keys to his immaculate classic racing car- the Mercedes 300SL Roadster.

To win the wager, Zulu would have to achieve a singular feat: successfully train businessman and international public speaker Vusi Thembekwayo – a racing enthusiast with no experience – in a limited amount of time, to set a lap time at Kyalami Race Track within five seconds of Häkkinen’s best Kyalami track time, in a car of Zulu’s choice.

Häkkinen and Gugu met at a car festival in Durban in 2013 where they and embarked on a tuk-tuk race with Zulu narrowly defeating the double F1® champion. Häkkinen spent the rest of the day with Zulu, cementing their new friendship. Recently hearing that Häkkinen would be in South Africa,Zulu posted footage from their 2013 race on Facebook and reminisced about the car. The post caught Johnnie Walker’s eye – setting in motion a series of events that led to the wager involving Thembekwayo.

Upon the culmination of Thembekwayo’s gruelling training, with three high-octane timed sessions at Kyalami Grand Prix Circuit, the Finnish racing legend was so impressed with Thembekwayo’s progression as a racing driver that he has granted Zulu’s wager, despite the fact that Thembekwayo missed the targeted 5 second time by a nail-biting 0.5 seconds.

“I’ve conceded Gugu Zulu’s wager in the true spirit of a Gentleman’s Wager,” said Häkkinen. “I am really impressed, Gugu did an incredible job of training Thembekwayo to really push himself – in the true Johnnie Walker spirit of always striving for progress – to achieve a result beyond all expectations.”

The #walkerwager campaign ultimately celebrates personal progression, achievement and the attainment of true rarity and success through hard work and commitment.

To find out more about the #walkerwager visit the Johnnie Walker Facebook and follow the brand on Twitter for updates.  Watch all the race wager videos here.

Not for sale for persons under the age of 18. Drink Responsibly.