Our approach was to position MWEB at the centre of a leading social trend, multi-screening – interacting on your smart phone / tablet while watching TV – by developing a world first … a couch that sends tweets.

Research revealed that well-established ISP MWEB lacked brand affinity and relevance to a modern, youthful society influenced by social media trends. Atmosphere’s goal was to reposition MWEB as innovative, fun and in tune with consumers’ mindset. 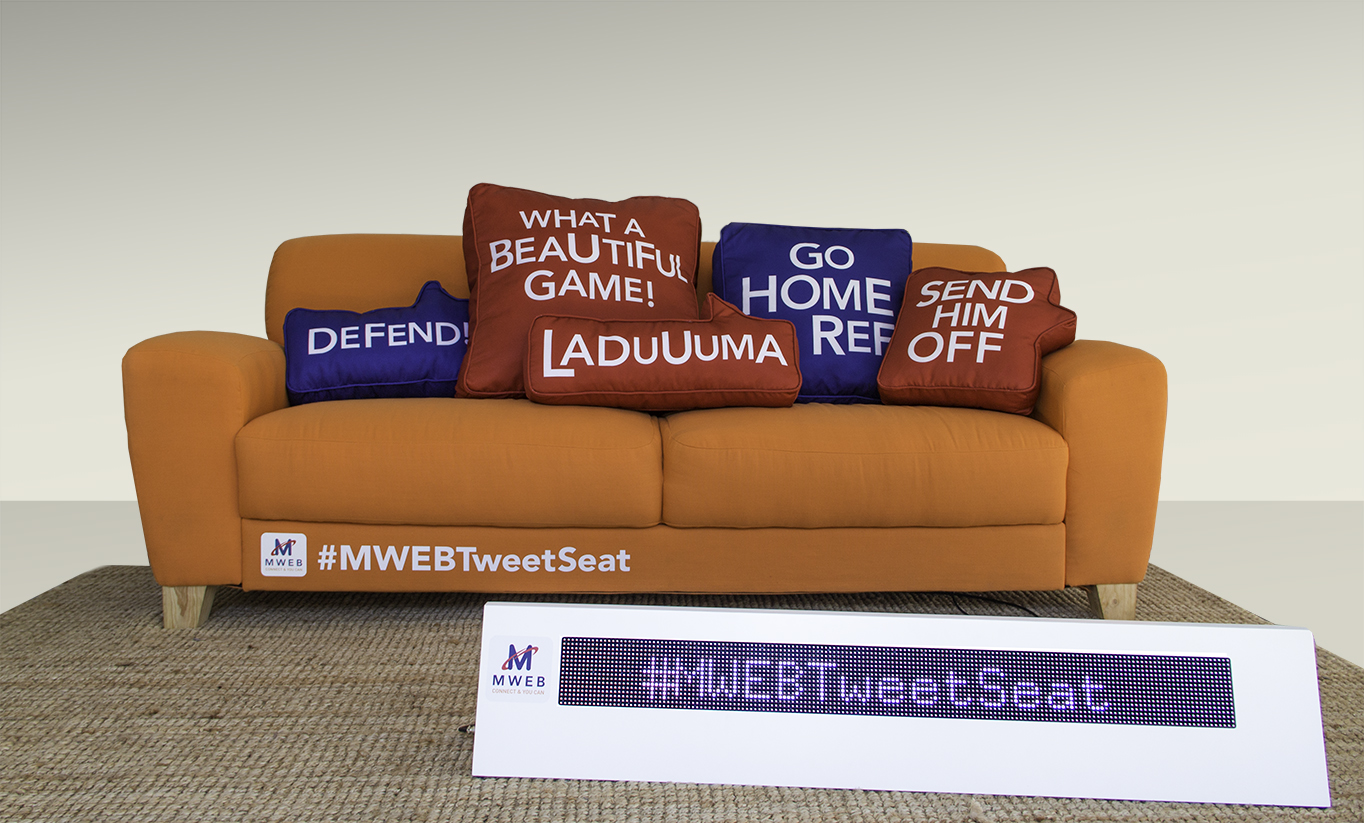 Our creative solution was to join a global conversation – from a sofa! We brought the following three elements together:
• expected social noise during a world sporting event
• multi-screening from your lounge
• WiFi, which is one MWEB’s differentiators.

The #MWEBTweetSeat was launched during the world’s biggest sporting event, the 2014 FIFA World Cup, which our research had predicted would deliver record-breaking volumes of social media comments, pictures and videos.

Our WiFi-enabled couch sent pre-programmed tweets about soccer, such as ‘Come on!’ and ‘Even Bafana can defend better than that!’.

Couch cushions, with printed tweet sentiments, were fitted with motion sensor detectors. When the cushions were thrown in the air, these triggered tweets – from our campaign twitter handle, @MWEBTweetSeat – allowed viewers to comment on the game without taking their eyes off the screen.

A celebratory tweet could be shared by jumping up and down on the couch. We called this ‘Cruise Control’ after Tom Cruise’s infamous couch jumping incident on an Oprah show.

The results were explosive. By leveraging this world-first invention, we generated positive brand conversations on mainstream and consumer platforms and repositioned the brand as modern and fun. The campaign surpassed earned media targets and sparked a global conversation.

Our campaign coverage, valued at R4 730 717 (AVE 1:1), reached more than 22 million consumers. A total of 84 editorial exposures were generated in mainstream media, including 42 broadcast clippings totalling 207 minutes of airtime.

Not only were 84% of social media and 97% of editorial brand mentions positive, but media and consumers organically described the brand as being cool and fun.

Although it was not a campaign objective, the #MWEBTweetSeat delivered impressive business results: 40 000 MWEB subscribers activated their Fon hotspots during the period.

And to top it off the campaign was awarded a Gold at the 2015 PRISM Awards for Best PR Campaign in the Technology Category.