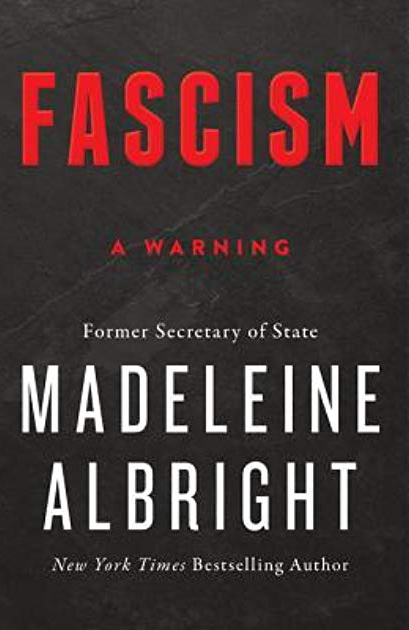 By former US Secretary of State Madeline Albright is just that, a warning about the threats faced by the world (past and present) from autocratic leaders who rise to power, and in the process, quash democratic values with hateful words and misinformation.  Clearly stating her concerns about the words and actions of the current US President, the author also delves into the exploits of other fascists (yes, Trump is a fascist) – such as Mussolini, Hitler, and others to expose the lies told to gain power, but also the degree to which these leaders tap into certain sectors of the population to gain support.

For communicators, it is a clear warning on several fronts. First, it is to look at what we do, taking time for profound introspection about the degree to which we represent forces, companies and individuals align (or not) with our ethics and morals. Most importantly, do we want to work for pathological liars or narcissists…yes I’m talking to you Sarah Huckabee Sanders!

The second warning, is the role and function that communications plays in helping to support the rise of such autocrats and the lies (or at least mistruths) that are told and perpetuated through propaganda and political rhetoric.  These engines of news and influence are powerful manipulators of truth and understanding. At their worst, they are weapons against freedom, undermining dialogue and honest engagement on issues pertinent to societal progress.

Finally, the book warns those of us who may be the mouthpieces for powerful and influential organisations and/or individuals to not just open our eyes and ears to the threats posed by bullies and blowhards. We cannot be passive and hope it will all go away like a momentary thundershower. Standing by and allowing leaders to perpetuate lies, deny science, and attack democratic institutions such as a free press, is not acceptable. As the author writes: “…history tells us that for freedom to survive, it must be defended, and that if lies are to stop, they must be exposed.”

To me, this is a call to arms (including pens and typing finger tips) among those with the ability to reach an audience.  We must write, post, share and speak on whatever channels we have at our disposal.  We must also march in the streets to counter lies with truth that is louder by virtue of the fact it has the most support (like the counter-protest that overwhelmed the recent far-right march in August).

In short, we need to expose misinformation and ‘fact fronting’ with the same gusto we adopt to rid the world of fatal diseases.  For fascism is an evil virus that lurks in all societies, rearing its head when we allow communicators to overpower the weak with words and actions that deceive and distort truth. Moreover, as history has shown us, fascist are also the ones that if given the power to do so – including platforms to communicate – cause unimaginable death and destruction.