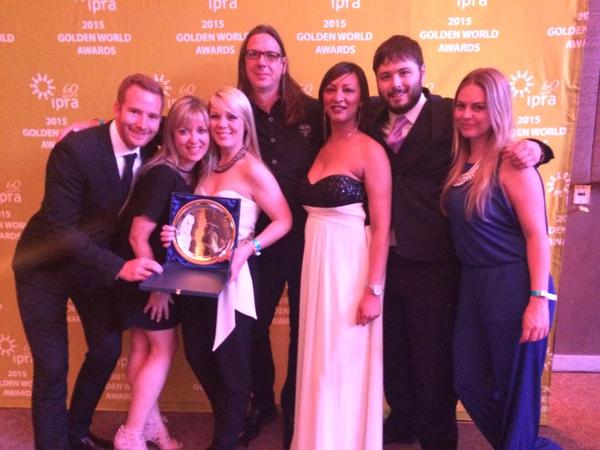 National public relations consultancy, Atmosphere Communications and its partners from the King James Group have walked off with the much coveted international Grand Prix For Excellence at the 2015 IPRA Award ceremony.  Its Sanlam One Rand Man Campaign also won a Gold IPRA award in the financial services and investor relations category at the award ceremony held in Sandton last night.  The International Public Relations Association (IPRA) honours the very best of PR campaigns from around the globe and delegates from more than 80 countries attended the gala event.

The award-winning campaign debuted during South African savings month (July 2014) as part of the financial services group,  Sanlam’s brand refresh and followed one anonymous man’s journey as he lived an entire month on R1 coins. The aim was to re-connect South Africans with their money and to encourage them to reconsider the way they spend and save – down to the last R1 coin.

“It is great to see an idea developed and executed in the southern part of Africa can find resonance on a global scale. The magic of this creative idea was that the insight was based on a universal issue – we’ve lost touch with the value of our money – which is applicable in any market. Our team developed an integrated creative campaign which used social media, webisodes, infographics, media partnership and traditional media coverage to drive the message on behalf of our client, Sanlam,” says Nicola Nel, managing director of Atmosphere Communications.

“We all know what it’s like to look up halfway through the month and wonder what vacuum our money vanished into. The One Rand Man was our way of answering that question. Its intrigue came from it being a real-time, social experiment that gave everyone the chance to compare their own financial experience, and come away a little bit wiser,” says Alistair King, chief creative officer of King James.

The IPRA Grand Prix For Excellence is the highest recognised award in the global PR industry. “The Grand Prix represents the industry’s highest recognition for outstanding, international standard of work,” says Johanna McDowell, former president of IPRA and one of the Golden World Awards (GWA) judges. According to McDowell, of all the hundreds of entries, the shortlist comprised of 80 finalists across as many as 33 categories. IPRA received a record number of 447 entries from all over the world this year.

The 2015 IPRA Public Relations World Congress is the first ever to be held in Africa.